A comic about an unwanted guest and even less wanted dad. 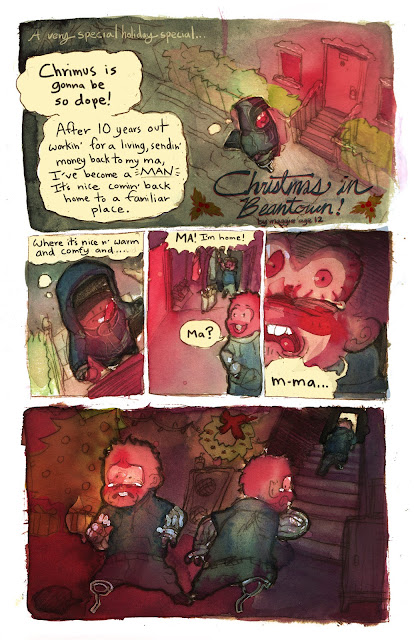 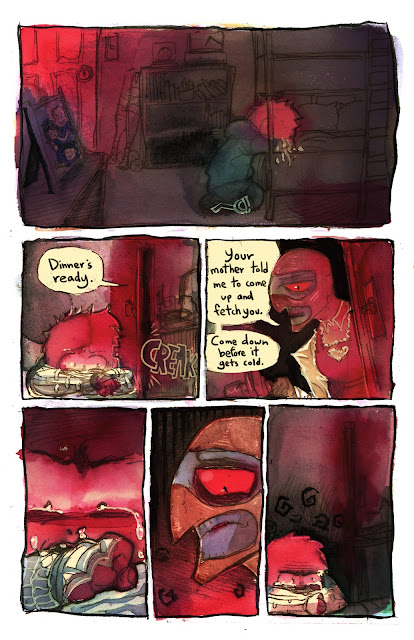 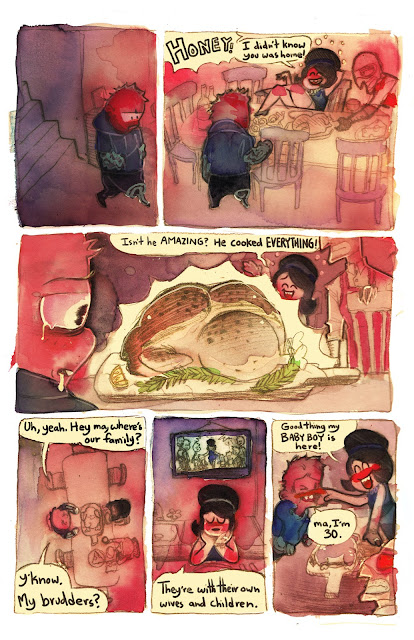 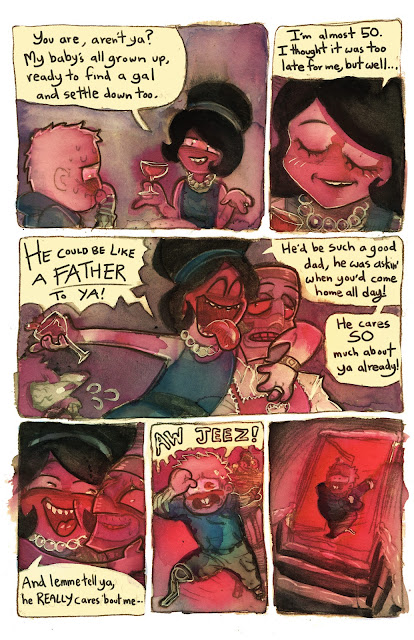 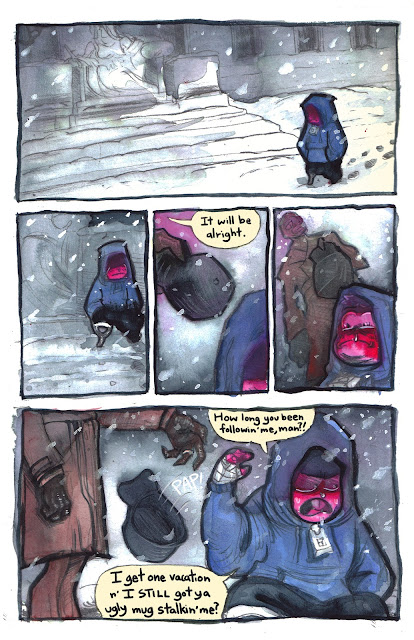 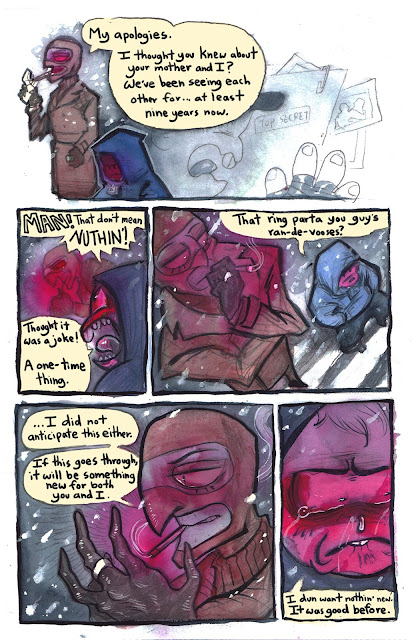 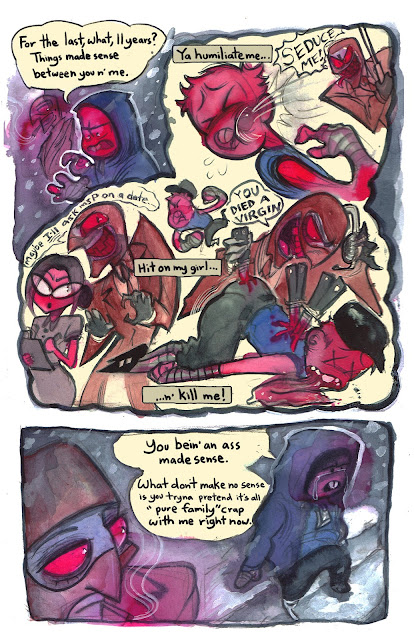 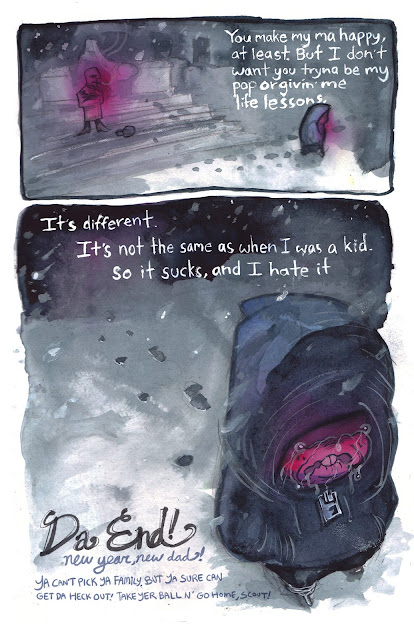 Closing off 2018 with a TF2 comic, it was nice to get back into one of my oldest fandoms this year!

The biggest surprise to me back in April was reading that Spy was pretty much confirmed to be Scout's dad in the latest comic issue from 2017.  BACK IN MY DAY (pre-tumblr 2007-2010), we didn't have many comics to draw lore from.  All we had was the Jarate comic, the WAR! DemoSolly comic, and the iPod comic to supplement the SFMs!  And lookit how much that has expanded!

So, here's my take on a Dad Spy comic.  RED Spy and BLU Scout is the classic 2009 daddy dynamic.  No reconciliation, no morals, no happy ending.  Cuz lemme tellya, deadbeat dads ain't much fun n' games.  I reject the Christmas movie narrative of "Dad reconciles with family"!!

One of my priorities in this lil' comic was giving a voice to Scout's mom.  She doesn't get much agency or exploration in her role to Scout n' Spy.  While the comics imply that Spy is Scout's biological father, I imagine her as a lonely older lady that somehow got into a tryst with a globe-hopping Spy just like the movies. An exciting rendevous right out of her romance novels that she's not willing to give up, even if she knows that Spy's unfaithful, unreliable, and untrustworthy (you think James Bond has just one Bond Girl?).

All her kids have grown up and flown the coop, and they send her money so she doesn't have to work.  She has a lot of idle time but nothing to take care of with no husband or kids, and she was unfortunately raised in an era when women weren't taught to value themselves outside of their relationship to men or children.  Having a forbidden romance adds excitement to her life, it's self-indulgent in a way she was never used to.  She's not a completely bad mother, but she's caught up in her idle housewife fantasy and won't take the best care of her grown-up children as a result.

Spy's role in this is a plot device.  He doesn't have much character involvement, much as he doesn't have much emotional involvement in this.  He kinda cares about Scout in a guilty sorta "sorry you were roped into this" kinda way, and he can put on all the romantic affects for Scout's mom.  But he can just as easily abandon this family just as he's abandoned many others before.  Begone, THOT.

Scout's a filthy gen wunner, he doesn't understand or accept the new pokeyman games cuz they're not as cool as the RBY cartridges he had as a kid :)  Completely blindsided, while everyone else is tutting that he shoulda seen this coming.  Hey, the guy was at war for a decade!  He lost a limb n' he's got post-traumatic stress n' he might be overreacting and being a crybaby cuz of that, give the dude a break!  The core of Scout's issue is that he doesn't want to accept a mom and family that's different from his childhood memories.  And he def doesn't want to accept a mom that's sexually active (with a dude he hates!) when he thought she wouldn't ever move on to someone else after her husband died.  He's upset at his worldview being shattered, and he's upset cuz he constantly walks into his mom having sexual congress.  That'll break a man.

What can Scout do after this?  Distract himself with work, try to make his own family to forget about his old one?  Well, it's not like you can just go find a wife and pop out babies.  Scout's destined to be a bachelor for life anyways.  He doesn't hate his mom or anything, he just doesn't want to participate in this family anymore.  It's an open-ended confusing situation for him.  Do what's best for yourself, you're a grown man now Charlie Brown!

Watercoloring this was a fun idea that was more bothersome in action.  Hard to keep consistent from page-to-page, hard to scan, and I don't really have the patience or time to wait for colors to dry.  I think next time I might just do digital colors, or B/W tones if I must go traditional.  Well, ya know I always prefer the look and feel of working traditionally than digitally.

Now that I'm finally done with this comic...time to work on the 78 other comic WIPs.  Have a nice rest of ya winter! 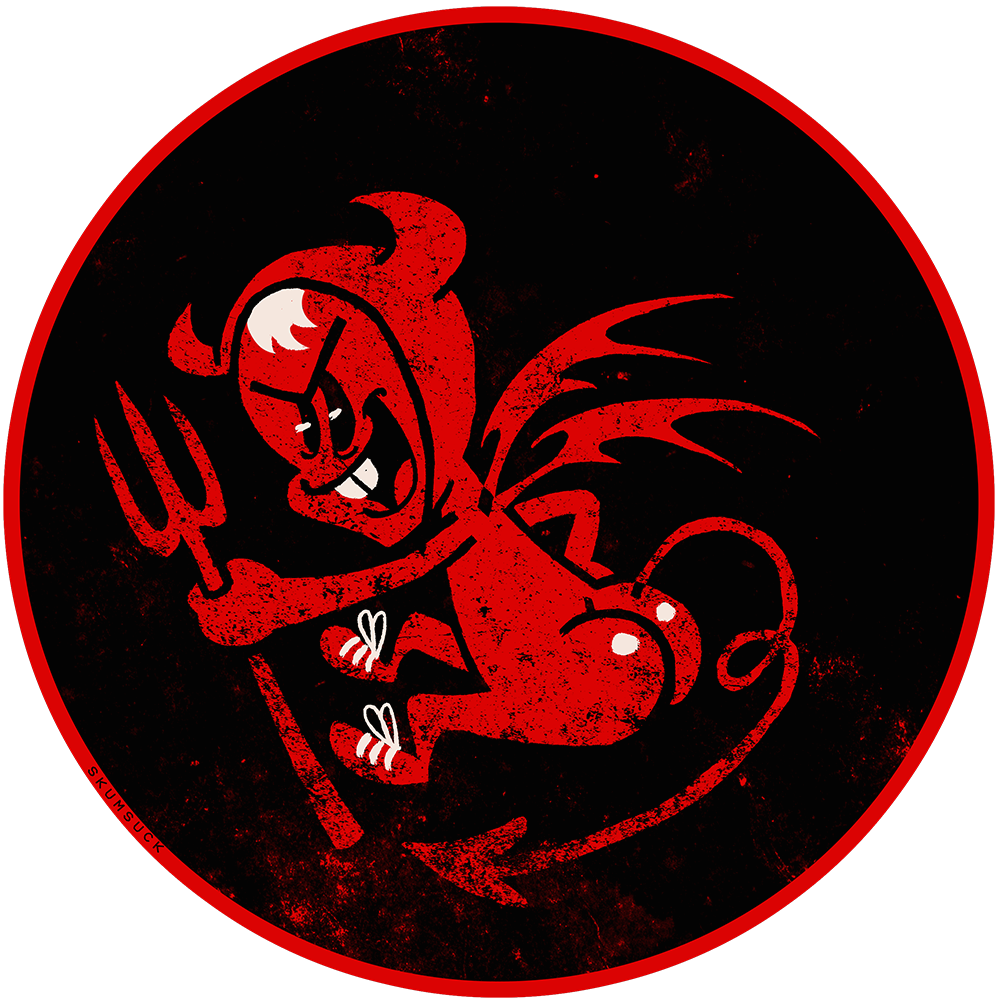